The Dow Jones Industrial Average (DJIA) and Nasdaq Composite (IXIC) both hit record highs this morning, but gains have so far been limited. The S&P 500 Index (SPX), in fact, has spent most of the day below breakeven, as traders take a wait-and-see approach ahead of third-quarter earnings season.

Among individual equities, Dow stock General Electric (GE) is sharply lower today, continuing its descent into multi-year-low territory. The energy sector also remains in focus; not only are hurricane-affected oil facilities in the Gulf of Mexico reopening, but Environmental Protection Agency (EPA) leader Scott Pruitt said he’ll be signing a rule to roll back the Obama-era Clean Power Plan tomorrow.

Continue reading for more on today’s market, including: 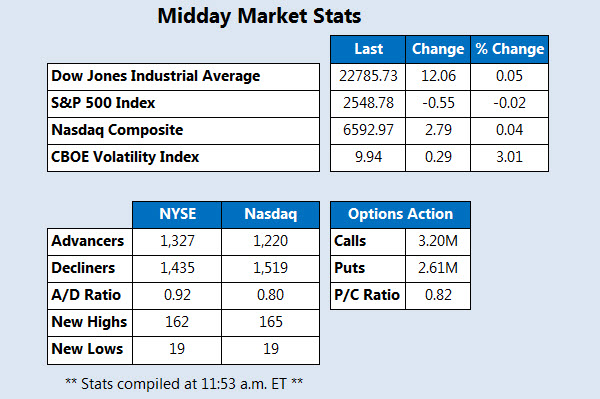 Among the stocks with unusual options volume is cereal and food company Kellogg Company (NYSE:K), with roughly 14,000 puts traded — 20 times the average intraday norm, and already at the highest percentile of its annual range. The October 60 put is most popular, with almost 12,200 contracts exchanged in what looks to be bearish, buy-to-open activity. At last check, K was trading down 2% at $61.41, and earlier hit a nearly three-year low of $61.08.

One of the best stocks on the Nasdaq is textile dyeing company Cleantech Solutions International Inc (NASDAQ:CLNT). The shares of CLNT are soaring after the company entered into an agreement to purchase no less than 51% of Inspirit Studio. The stock was last seen trading up 115% at $7.14, on pace for its highest close since late 2015.

One of the worst stocks on the New York Stock Exchange (NYSE) today is movie theater entertainment company AMC Entertainment Holdings Inc (NYSE:AMC), with the shares down more than 6% at $14.27, following a price-target cut by Wedbush to $20.50 from $22.75. The shares have dropped more than 56% over the past year, and touched a record low of $12.05 on Aug. 18, not long after a post-earnings bear gap. 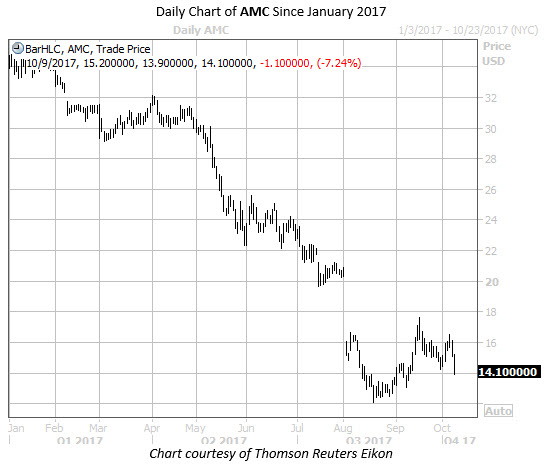 The Secret to Making Your Options Trades Skyrocket On Monday