I can still remember traveling down I-95 as a child. Pumping my fist at every truck we passed. Hoping they’d blow their horn in response.

But times are changing, and the iconic cargo hauler is getting a massive design upgrade.

But its electric truck division is why the company is a fantastic buy right now.

Companies are lining up to order Tesla’s new semi truck.

The first major deal for Tesla’s semi was struck with Anheuser-Busch, adding 40 new vehicles to its distribution fleet.

The investment in Tesla’s trucks marks Anheuser-Busch’s “commitment to sustainability and to reduce operational carbon footprint by 30% by 2025,” as stated on their website.

According to Electrek, if Anheuser-Busch achieves its goal of a 30% reduction, that’s equivalent to taking 500,000 gas cars off the road.

Currently, Sysco operates a fleet of approximately 7,000 trucks. But their foray into electric marks a significant shift in industry demands reflective of changing global perspectives.

Cost reduction is an obvious driver for change here, but many also note corporate responsibility to protecting the environment as another major driver.

As Tom Bené, president and COO of Sysco, notes:

This reinforces Sysco’s commitment to corporate social responsibility by reducing the environmental impact of our operations. In addition to the positive environmental impacts, we will also benefit from reduced fuel and maintenance costs and drive associate enthusiasm with the introduction of new and unique technology

Pepsi, however has made the biggest splash to date. The company one-upped everyone by revealing that it would add a whopping 100 trucks to its fleet, with a down payment of $20,000 per truck.

Tesla may have found its true cash cow. Check out their chart for the past 30 days: 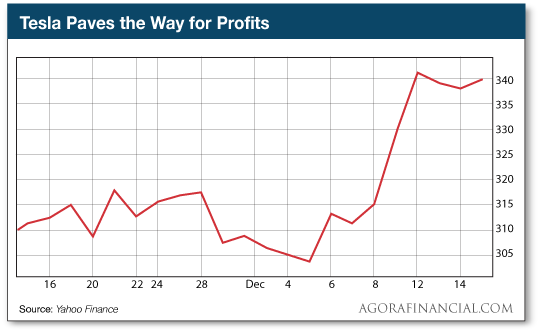 The trucks can travel 300–500 miles on one charge, depending on the model. In terms of operating costs, these trucks offer a much cheaper alternative to traditional semis.

As a bonus, Tesla also claims these new electric trucks will be the fastest rigs on the road.

But Anheuser-Busch, Sysco and Pepsi aren’t the only major names placing orders for Tesla’s new truck.

Walmart ordered 15 trucks in November too.

Tesla’s cars might grab the headlines, but it’s the truck division that’s paving the road to big profits right now.

Maybe cars for consumers are incidental to Tesla’s long-range plans.

The Most Import Moment for Pot Stocks Just Happened

Blackstone COO: “Stocks Could Fall As Much As 20% This Year”