The 800-pound gorilla is about to enter the room.

Facebook wants to IPO in the second quarter of 2012 with a $10 billion offering, valuing the company around $100 billion.

But does that make it a $100 billion company?

In what’s likely to be a dramatic first day of trading come April 2012, investors would be smart to pay close attention to the downward death spirals of Facebook’s buzz-heavy competitors.

LinkedIn (NYSE: LNKD) soared on its first day of trading. It’s now worth half as much: 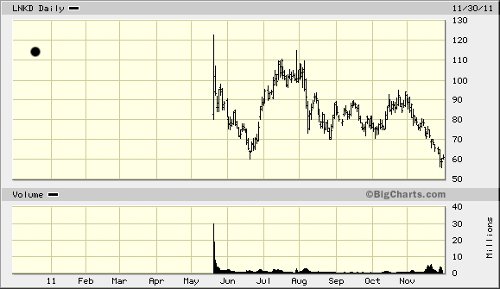 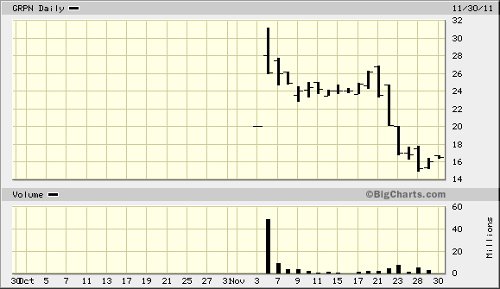 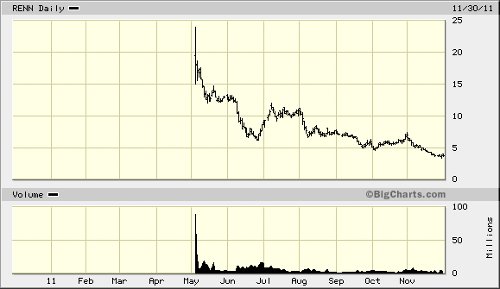 The glitz has simply worn off. The days of hyper-growth are over.

Facebook creators will get rich, but new shareholders will get the shaft. Investors would be smart to stay away.

Charlie’s frantic email read like an investor who risked far too much.

What could I tell him?

That he missed the 800-pound gorilla sitting in the middle of the room?

That I bought put options on it a week ago, and am now sitting on 30% gains in just days?

The problem with social networking IPOs is that foolish investors — giddy with profit potential anticipation — are placing high valuations on social networking companies because they think the sector can’t fail.

“People think these stocks stay red-hot forever. They don’t,” I told Charlie. “Even Warren Buffett has said investors should be wary of social networking stocks, noting that the most popular ones would be overpriced when they came to market.”

Take Groupon, for example. Groupon went public with a price that was way too high.

It was supposed to be “the fastest-growing company ever.” But regulators raised concerns over revenue, and after cutting its valuation in half pre-IPO, we knew to stay away.

An Alternative to Social Networking IPOs


Social networking IPOs may not be the safest stocks to own. But there are alternative ways to play them…

As we saw with the Visa’s (NYSE: V) IPO, there are backdoor trades that’ll allow you to profit — even before Facebook goes public.

So how do you get a piece of Facebook before it goes public?

Unless you’re Goldman Sachs or have friends in high places, you can just about forget about getting pre-IPO shares. You’ll have to wait and jump in on the Facebook buying rush on the day of IPO.

But you can profit ahead of the IPO with the First Trust IPOX-100 Index (FPX), which carries an expense ratio of 0.60%.

What I like about FPX is that it offers “limited exposure” to new, popular IPOs and their short-term gains. And it provides a nice cushion because it’s well-diversified.

Out of the gate, it’s been an utter disaster with Groupon weighing it down… but as we get closer to a Facebook IPO, SOCL should run. It’s at least worth watching, despite its most recent moves.

At the end of the day, I would stay away from social networking IPOs.

Instead, profit with these backdoor trades.

Stay ahead of the herd,

Precisely what is a line that is relative of? a personal line of credit is actually sort of loan that delivers borrowers money th

12 Things You Shouldn’t Compromise On In A Relationship

You’ve lived under a rock if you haven’t noticed a kind of abnormal obsession about French people.