The start of 2018 wasn’t particularly auspicious for cryptocurrencies…to say the least. The value of the market dropped by a whopping $93 billion, to hit a low of $276 billion on February 6, well off the all-time high of $834 billion reached in the early days of January.

Bitcoin for example, the world’s biggest virtual currency by market capitalization, lost about 25% in January, its biggest monthly percentage decline in three years, amid increased fears over regulatory scrutiny in the U.S. and Asia. Despite its modest recovery in recent days, Bitcoin prices remain down about 18% since the start of 2018.

Bitcoin isn’t the only mainstream cryptocurrency to endure a rough start to the new year. For instance, Ripple, the third biggest cryptocurrency in terms of market cap, has declined 55% since January 1, making it one of the worst performing digital currencies of 2018. 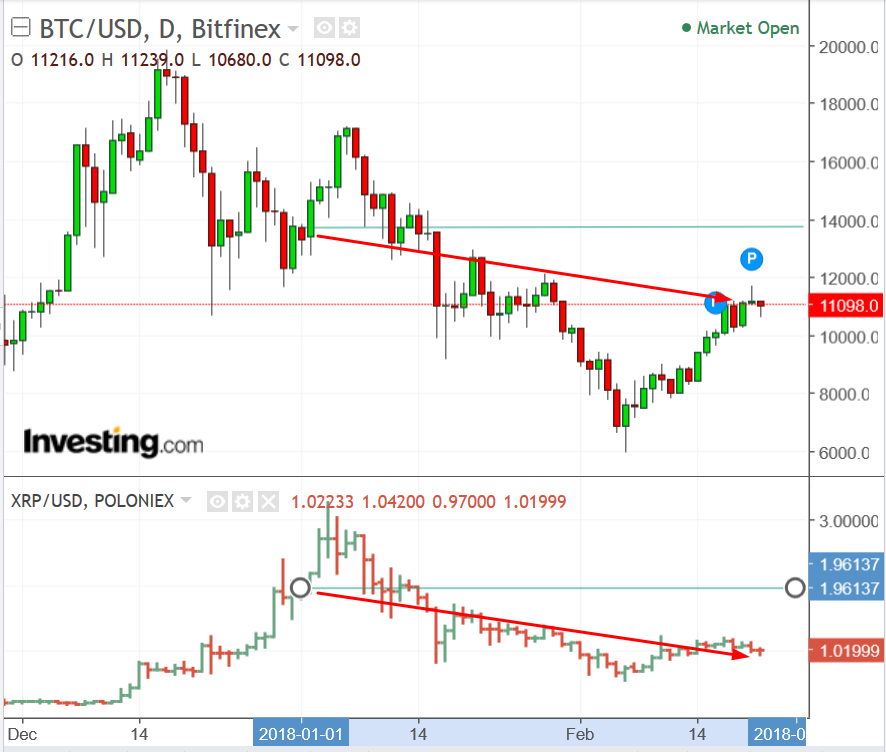 Still, not all coins have endured the wrath of sellers, with some of the more resilient names, covered below, catching many crypto traders and investors by surprise. In this post we take a look at the five best performing cryptocurrencies so far in 2018. Most interesting, perhaps, is that many of last year’s top performers are absent from this list.

In order to filter the 1,500+ coins which currently exist in the cryptospace, we decided to focus only on digital currencies with a market cap of greater than $1 billion, which left a total of 26 coins.

Editor’s note: Investing in cryptocurrencies is highly speculative.This post should not be considered an endorsement, nor investment advice. It’s simply reportage. Do your own due diligence before investing in any particular asset or asset class. Coin statistics were collected on February 21, 2018. Values might differ depending on when you’re reading this post.

At current prices, it has a market cap of around $3.0 billion, making it the 16th biggest cryptocurrency in circulation. 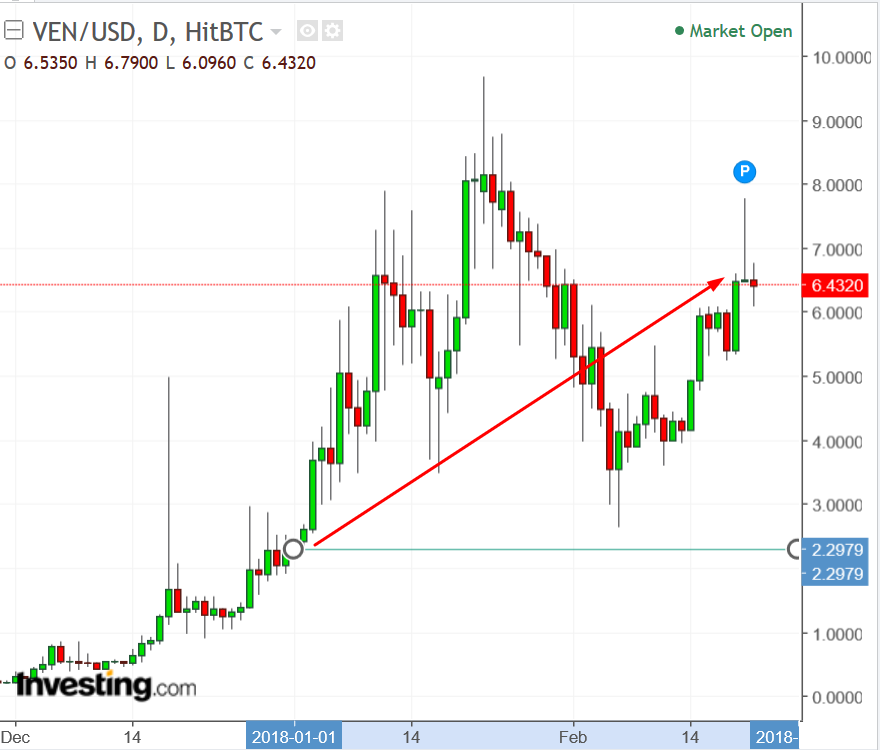 Its blockchain technology is currently being used by a number of Chinese companies in connection with importing goods. It is also utilized by PricewaterhouseCoopers for “third party services”, which is another major validation of what VeChain’s technology is capable of.

The price of one NEO coin changed hands at $75.02 on January 1, 2018, before soaring to a record $198.20 on January 15 amid general optimism over its future value. While it has since pulled back from those levels, it has more successfully held on to gains versus any other major digital currency during the recent market rout.

At time of writing, NEO was trading at around $124.50, representing an increase of 64% so far this year. It is currently the seventh biggest cryptocurrency in circulation, with a market cap of roughly $8.3 billion. It ended 2017 with a gain of 53,450%. 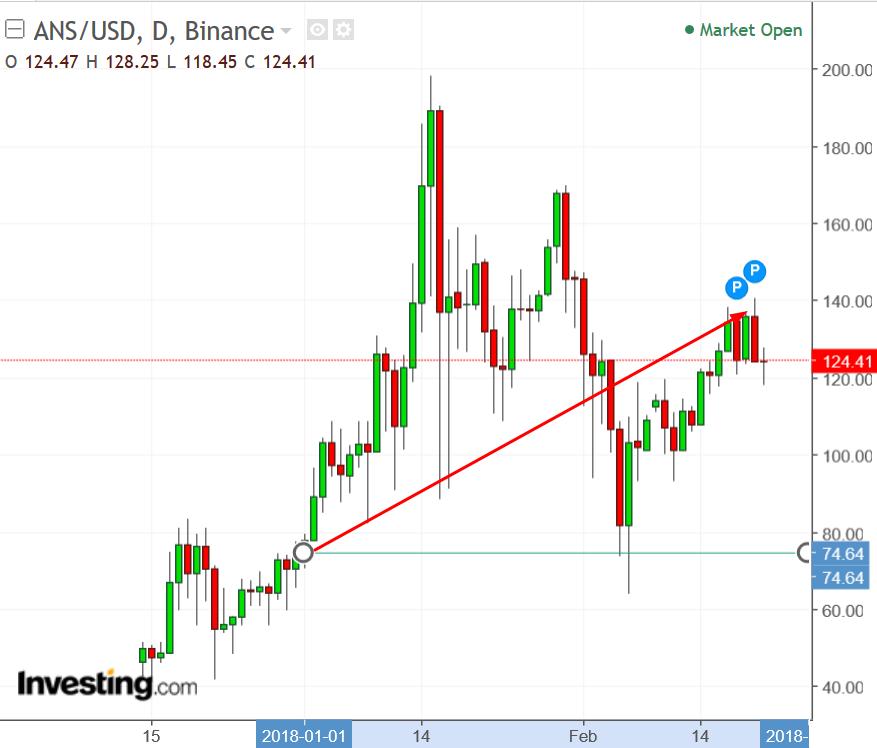 NEO, dubbed ‘Chinese Ethereum’ by many cryptowatchers because it was launched in China and is operationally similar to Ethereum, is a blockchain platform and cryptocurrency which enables the development of digital assets and smart contracts.

NEO works on the same functionality that Ethereum does, as both aim for similar roles in the crypto community. Both want to be platforms for decentralized applications, initial coin offerings, and smart contracts, but NEO also supports decentralized commerce, identification, and digitalization of assets. Additionally, it closes loopholes that have caused Ether contracts to be vulnerable to hackers.

It was originally launched in 2014 as AntShares by Da Hongfei, CEO of Onchain and a blockchain evangelist in China, along with co-founder Erik Zhang.

Understanding OnChain is critical to understanding NEO. They’re not the same company, but their interests align and they have a partnership. OnChain’s system, known as DNA (Decentralized Network Architecture) aims to work with Chinese businesses and government institutions.

If OnChain can successfully integrate with Chinese businesses and government entities, that will greatly spur adoption of NEO, which would bode well for its future.

It has a market cap of approximately $2.6 billion, making it the 17th largest digital currency. It notched a gain of 13,480% last year. 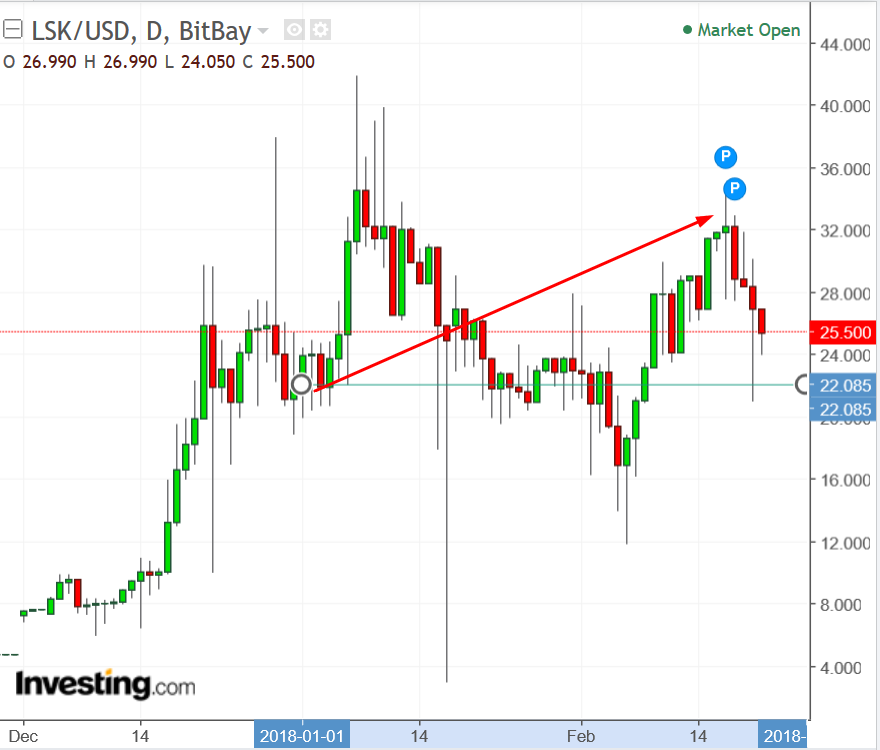 Lisk is a public blockchain platform that provides decentralized blockchain apps. It started as a fork of Crypti, a little-known cryptocurrency developed by Max Kordek and Oliver Beddows in May 2016.

The idea behind Lisk is that every blockchain app is on its own sidechain, separate from the main blockchain. The benefits from this configuration would be in solving scalability issues that many cryptocurrencies are facing, while also allowing for far greater customization to particular sidechains, something thatcould not be done on other platforms.

Similar to NEO, Lisk also works on the same functionality as Ethereum, with both attempting to provide a platform for a similar idea: decentralized applications (Lisk calls them blockchain applications). The main difference between the two is that the Lisk blockchain was not built with the intent to create smart contracts.

In a promising sign for its future, Charles Hoskinson, ex-CEO of Ethereum and founder of Cardano, along with Steven Nerayoff, a former advisor for Ethereum, joined Lisk in June 2016 as senior advisors to facilitate product development.

Binance Coin‘s price at time of writing was $9.8795, signifying a gain of 19% in the first six weeks of 2018. Its price on January 1 was $8.53. Despite retreating from record-high levels of $24.64 reached on January 12, the digital currency remains a strong candidate for top gainer of the year.

At current prices, it has a market cap of nearly $1.1 billion, making it the 28th biggest digital currency. 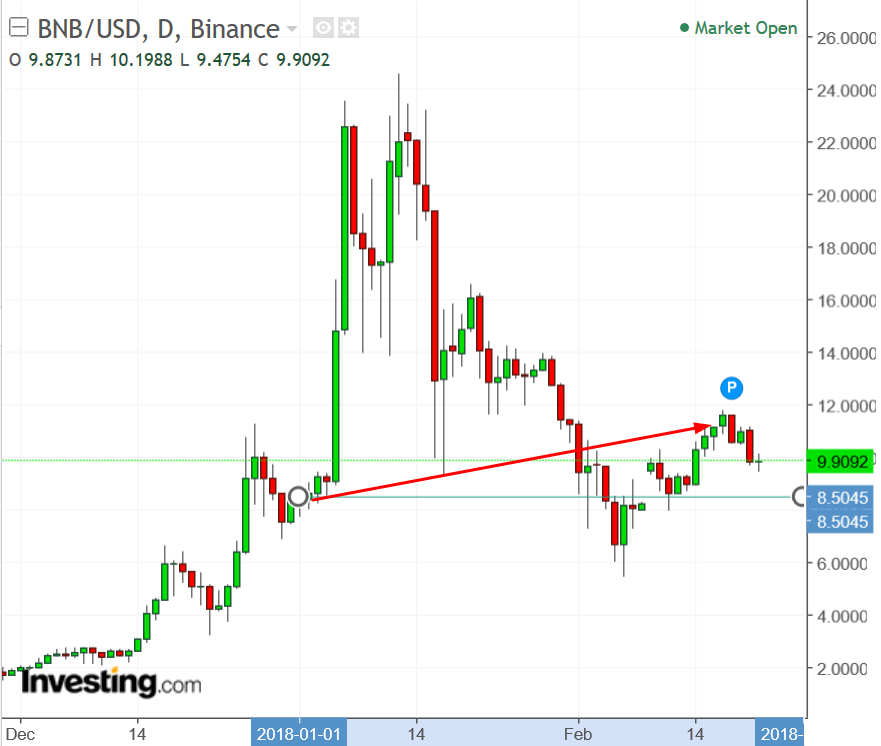 Binance Coin is the signature virtual token of the popular China-based crypto exchange Binance, which supports around 100 digital currencies and is one of the world’s leading exchanges for Bitcoin, Ethereum and Tether.

Launched in July 2017, BNB is used as an alternative method for paying Binance’s trading fees. Purchasing the coin gives customers a kick-back in the form of a 50% discount on all transaction and withdrawal fees in their first year of use.

CryptoCompare describes the currency this way:

The idea is that customers are incentivized to purchase BNB and keep trade on the exchange alive. Also, as more people begin to use Binance, the price for Binance Coin will also increase.

At current prices, Etheruem has a market cap of approximately $94 billion, making it the world’s number two cryptocoin, trailing only Bitcoin. Interestingly, it is the only ‘mainstream’ cryptocurrency to make the list. In 2017, it climbed 9,160%. 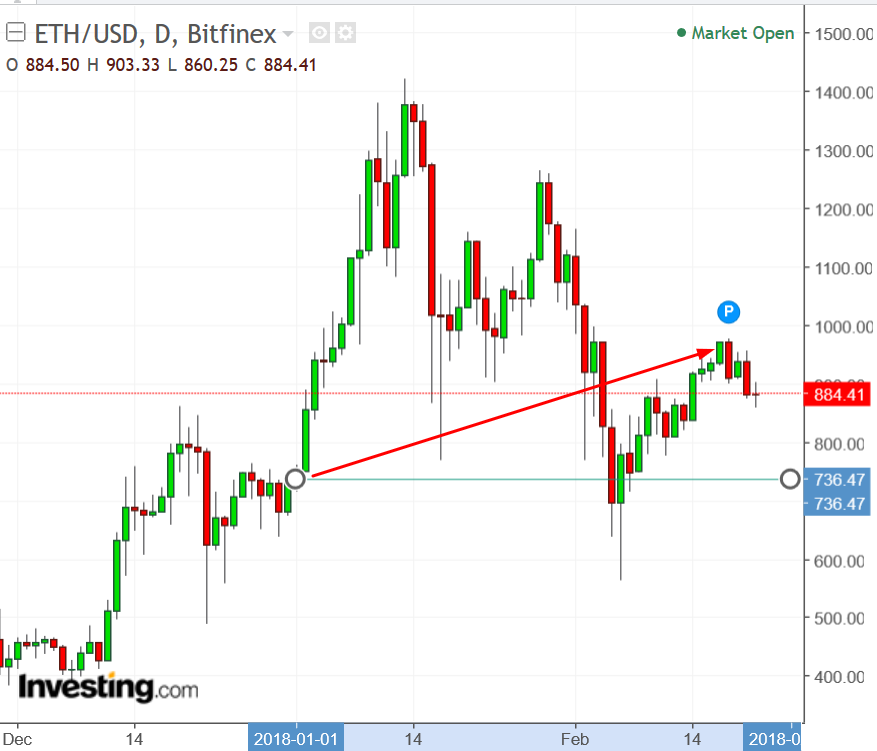 Ethereum is an open software platform based on blockchain technology that enables developers to build and deploy decentralized applications that run smart contracts. It was proposed in late 2013 by Vitalik Buterin, a cryptocurrency researcher and programmer, and launched in 2015.

Gains have been fueled by several bullish factors, including increased public awareness and legitimacy, as well as the growing support of major global corporations.

The recently formed Enterprise Ethereum Alliance, which consists of names like Intel (NASDAQ:INTC), Microsoft, JP Morgan Chase (NYSE:JPM) and Credit Suisse (SIX:CSGN) to name a few, has been helpful in supporting the cryptocurrency’s rapidly growing functionality.

Bottom line: It’s been a highly volatile start to the year in the cryptocurrency space, with few signs of a slow-down as we move further into 2018. So things could get even more interesting as markets move forward. Perhaps most surprising: barring Ethereum, the top performers on this list are names that haven’t achieved mainstream status yet. But who knows, in the highly unpredictable cryptocurrency space, 2018 could be their year.

We think this is a trend that will continue as the year progresses, as many late-comers to the crypto party remain more hesitant to invest in the coins that have already rallied thousands of percent, and instead look for the cheaper, arguably more promising alt-coins.

The fastest way to get rich in cryptocurrencies