Marijuana has always been a hot topic and with medical marijuana being readily available to numerous patients, its popularity has only increased. It can be used for various medicinal purposes, from treating chronic pain to anxiety and depression. Those who need to use marijuana can buy weed online canada with ease or get a prescription from their doctor.

This marks the first time ever a pot company’s stock is as easy to buy as Coca-Cola, GE, or Apple. It is an industry that is growing quickly, especially thanks to it being a rumoured potential cancer treatment (find out more about that here).

“We’re the only pure-play marijuana company” on a U.S. exchange, says Cronos CEO Mike Gorenstein in a CNN report.

And a Nasdaq listing should quell any fears of legal implications.

One Beacon Securities analyst notes, “The SEC would have gone through a very thorough review/vetting process before allowing a cannabis company to list on a major U.S. exchange.”

The main reason the SEC finds Cronos compliant is because they only do business in countries where marijuana is federally legal.

And securing a Nasdaq listing is not only a huge step forward for Cronos. It’s a huge step for the entire industry. If you are thinking of becoming a part of this industry then you might want to check out a website like https://herbceo.com/ to help give you some insight on what you should do next.

Speaking in an interview with Marijuana Business Daily, CEO Gorenstein notes the listing “shows the stigma is eroding.”

Cronos: Who They Are, What They Do

Cronos is one of Canada’s largest medical marijuana companies.

The company owns two medicinal marijuana and cannabis oil brands: Peace Naturals, in Ontario, and Original BC, in British Columbia.

The company also owns 21.5% in Whistler Medical Marijuana Company, according to their website. Companies like this often invest in items like a Rosin Press, which means they need the capital from investors to assist. This makes its basket of product offerings extremely diversified.

As previously mentioned, the company only operates in 100% legal international markets. But this doesn’t mean Cronos is short on business.

The company has many partnerships abroad including in Germany with G. Pohl-Boskamp GmbH. as well as in Israel with Kibbutz Gan Shmuel.

Cronos is also working on a joint venture in Australia, as reported by Bloomberg.

And when the tide fully turns in the U.S., Cronos has a plan for that too.

“When it comes to U.S. market entry, the regulatory landscape can change a lot, and we feel it is heading in the right direction. We’ll be opportunistic and aggressive.”

The Impact to You

You can now access a major pot stock as easily as you would any other mainstream Wall Street play.

The stock lists as CRON on the Nasdaq and has a market cap of over $1.61 billion.

Since its listing the stock has seen a steady uptick, mirroring recent action for pot stocks across the board.

Not a bad first week. Check out the chart: 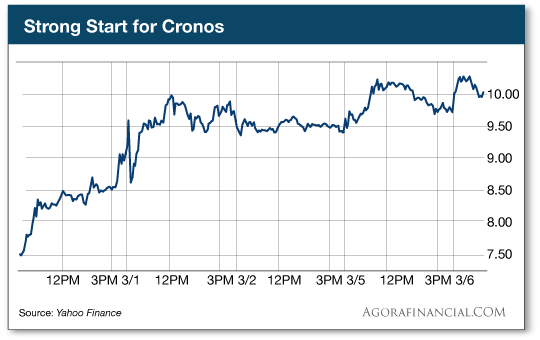 “It’s very significant for the company and the whole industry,” Gorenstein said in an interview with Bloomberg. “It’s a huge moment – just shows the stigma is continuing to erode on cannabis.”

I’m not saying run out and buy Cronos today, but it’s a stock worth watching.

And a huge slew of opportunities are coming.

Blackstone COO: “Stocks Could Fall As Much As 20% This Year”

The Fund That Puts Warren Buffett To Shame