Home Featured Survey Reveals What Really Scares Americans: #1 on the List May Surprise You

Every year, Chapman University conducts a Survey of American Fears. The annual survey provides an in-depth examination into the concerns of average Americans, tracking changes and trends over the years. 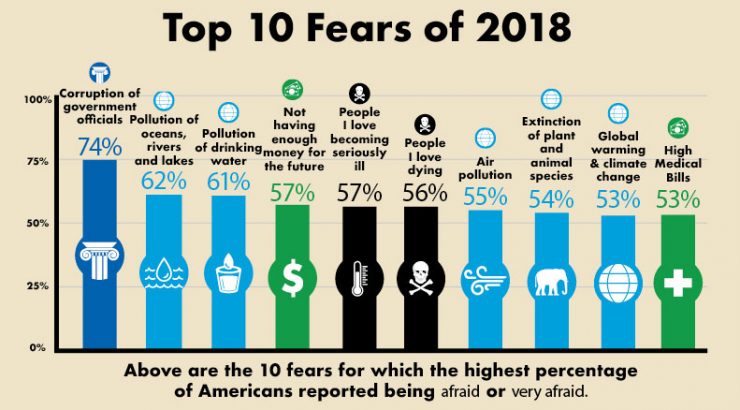 “It is worth noting that the fears regarding corruption and the environment have increased significantly following the election of President Trump in 2016 and all top 10 fears continue to reflect topics often discussed in the media,” said Christopher Bader, Ph.D., professor of sociology.

Pollution of oceans, rivers, and lakes, polluted drinking water, money worries, and loss of loved ones also are of high concern.

Here are some of the other fears Americans have:

The survey also explored the reasons people do not evacuate when a disaster is heading their way. The most commonly cited reason by 43% of Americans is that they want to protect their homes from looting. “Tragic overconfidence” and “Pets” followed with 34% each. You can read the full report here: Fleeing Death: Disaster Evacuations in America.

As for political division, the survey revealed something that concerns the researchers: “What frightens Republicans the most doesn’t even register for Democrats, and vice versa. We see that bifurcation increasing, and that frightens me,” Bader said.

He graduated from Columbia Law class in 1978. Nicholas Sandler, President